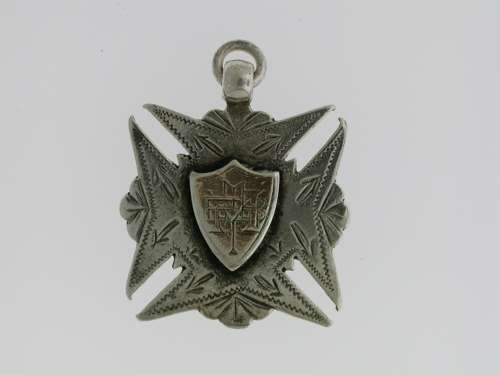 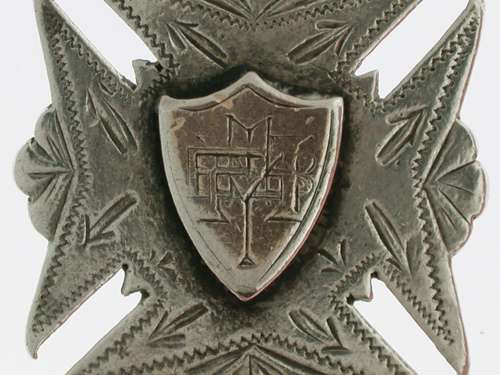 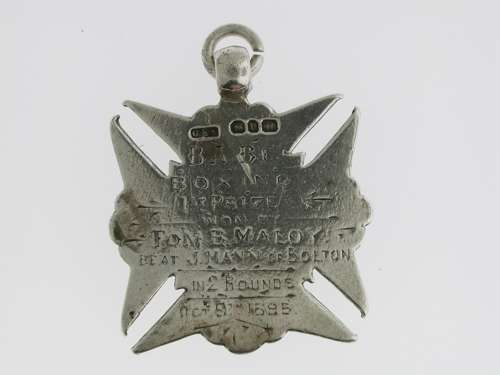 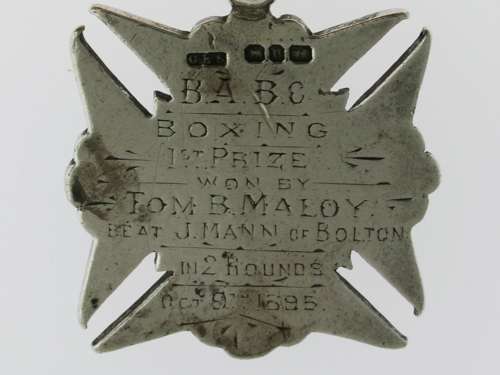 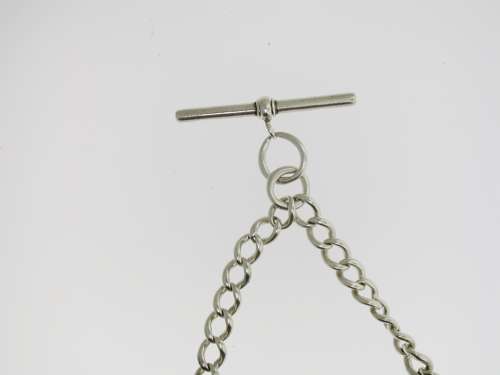 A silver Fob of boxing, hallmarked for Birmingham 1894 and makers initials C.E.S. Please see pictures and history below. The Fob was given in 1895. As well, please read the blog on https://wyrleyblog.wordpress.com/2022/01/28/tommy-maloy-hednesford-scamp-to-bolton-boxing-champ/

This was an interesting one. While I have to say I cannot prove this 100% (as Thomas was not a professional boxer), I can honestly say that I am satisfied (in my professional capacity) beyond a reasonable doubt - hence I forward you the story.

The issues at stake when looking at the medal were the spelling of Maloy (surnames can often go through different spellings - but it is interesting to note that the Maloy change in spelling actually comes both before and later). Second, while J Mann is listed as from Bolton, this did not mean Maloy was from the town. These questions need to be balanced with positives - that if the engravers bothered with a middle initial, then it was not only important to Maloy, but gave more credence that the spelling of Maloy was correct as he would spell it at that time - and this is what turned out to be the case - as his name would be Thomas Barker Maloy.

I started with the BABC inscribed on the medal - this is without doubt the Bolton Amateur Boxing Club - which had been open since at least 1893 (as per adverts in the Bolton Evening News) under the care of 'Professor Nat Eccles', who was an 'ex-Midland Counties champion'. It was located at the Rigby Assembly Rooms on Lower Bridgman Street, Bolton. Strangely, perhaps reflecting the fact that boxing and the club was not considered newsworthy, the bout referred to on the medal (9 October 1895) was not covered in the Bolton Evening News around that date.

Moving on to the two names on the medal. J Mann, despite him being described as from Bolton, I cannot trace with any certainty as to give me confidence; Tom B Maloy, however, appears in two newspaper reports. The first is the Sporting Chronicle of 10 December 1897, which prints that he is from Bolton and on the 16 December, he will be fighting a George Razell (the name is difficult to read) at the Stalybridge Gym Club (Manchester way) in a bantam-weight (both weighing 7st 10lb) contest over 10 rounds for a silver cup. I could find no reference of the result. The second report was from the Bolton Evening News dated 9 December 1912, where a Tom Maloy acted as a second to Owen Moran of Bolton (who won the bout on points). I was now confident that Maloy was from Bolton and had likely finished fighting by 1912, but remained in the sport. - as it happened, this is because he would have been 40 years old by 1912.

The story starts in 1866, when Thomas 'Molloy', a coal miner born in 1839, from Broseley in Shropshire, married a Phoebe Barker, a one time domestic servant, born in 1843, and also from Broseley. This is where Thomas Barker Maloy gets his middle name - which is quite common for the period. By 1871, the couple have two children (Mary and Ann), and appear on the census as 'Moloy', in Killlamarsh, in Derbyshire. Thomas was still a coal miner, and clearly would continually travel for work.

In 1881, the couple appear in the census for Hednesford (this is near Cannock and just a few miles from where I live). The family (described as 'Malley') has grown, with five more children at least. Thomas Barker Maloy was the first-born male, it appears; he was born in 1872 while the family were still in the Staveley area of Derbyshire. There were also several lodgers in the property, all from Broseley, including what is likely Thomas' brother John.

In 1891 the family (now called Molloy), having moved again, are in Skegby in Nottinghamshire. Thomas is still a coal miner, as is Thomas Barker Maloy (aged 19) and his younger brother James (aged 14). John - interestingly described as Maloy - is still lodging with them.

At some stage between 1891 and 1895, Thomas and Phoebe move to Bolton (as Thomas Barker fought his bout in 1895 - making him 23 when he beat Mann). It now has to be said that the only Thomas Maloy's in Bolton are the Thomas senior and Thomas Barker followed here. Thomas Barker Maloy married Florence Roughsedge in the early months of 1900.

By 1901 Thomas was, at 61, a watchman in a cotton mill. Thomas Barker Maloy (which is how they both appear, in different households, on the census that year) is a yarn twister at a cotton mill and he and Florence are living in Bride Street in Bolton. Over the next decade the family, still living in Bride Street, would have 4 children (two of which were born in Chesterfield way, likely as there was family to support Florence after the birth): Thomas Roughsedge Maloy was born in 1902 (Bolton), James Arthur Maloy was born in 1903 (Chesterfield), Henry (Harry) was born in 1906 (Chesterfield) and Arnold in 1910 (Bolton).

Thomas senior and Phoebe both passed away with days/weeks of each other - around November 1918 (Phoebe was buried in mid-November, Thomas died in the October to December of that year). Thomas Barker would see Florence, his wife, pass away in February 1941. He married again the following year - to Annie Battersby, from Bolton. Later, the family seemed to have styled their surname as Mayloy. Strangely, as with his own parents, Thomas Barker was buried on 29 June 1960 and his second wife, Annie, followed him to the grave days after - she was buried on 11 July 1960.